In his State of the Union Address on Tuesday night, President Joe Biden put his weight behind privacy for children, calling for social media platforms to be held accountable for the ‘experiment they’re conducting on our children.’

In his statement, he made the connection between children’s safety and children’s privacy, saying it was time to strengthen privacy protections, ban targeted advertising to children, and for tech companies to stop collecting children’s personal data.

In welcoming the President’s statement, 5Rights Foundation highlighted the bipartisan opportunities to put this into action, including through the California Age Appropriate Design Code Bill. Our Chair, Baroness Beeban Kidron, said:

“Last night in his State of the Union Address, US President Biden called for social media platforms to be held accountable. He equated children’s privacy to safety - this is ground-breaking for children’s rights in the digital world. We stand in support of the California Age Appropriate Design Code Bill and our colleagues in Washington who are fighting for children’s safety and privacy.”

The UK Age Appropriate Design Code (AADC) has already demonstrated how privacy translates into safety, with a wide range of services making hundreds of changes to the way they cater for children. The demands set out by President Biden echo the UK AADC and two bipartisan Bills proposed last month in the US:

Both of these would deliver on President Biden’s call to action.

Lawmakers have the solutions to deliver the digital world that children deserve. 5Rights urges them to make them a reality. 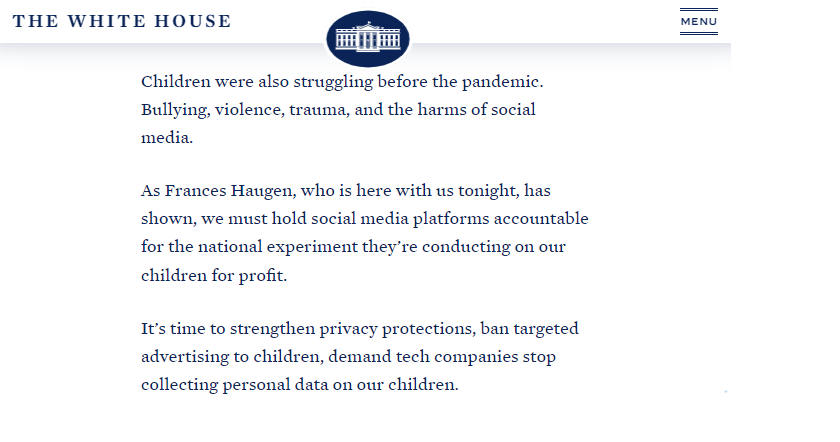